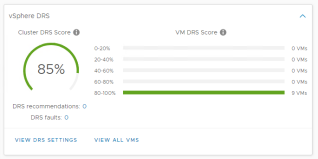 Introducing the new DRS logic and UI including…

The first release of Distributed Resource Scheduling (DRS) dates back in 2006. Since then, the data center and workloads have changed significantly. With the latest release of VMware Cloud on AWS, revision M9, we introduce the new DRS UI that accompanies the improved DRS logic that was already introduced in release M5. The new and The post Introducing the new DRS logic and UI including VM DRS scores appeared first on VMware vSphere Blog.